Yiyun Li Tells Writers to Eavesdrop on Their Characters 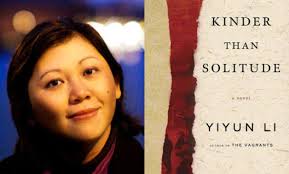 Yiyun Li, in her keynote speech at the San Francisco Writers Conference, said we should eavesdrop on our characters and their lies, lies to other characters and to us. When asked how to eavesdrop on them, Li said to let them be and see what they do. The author is like a translator and listens to the characters.

Kinder Than Solitude is a profound mystery in which three friends’ lives are changed by a murder one of them may have committed. It has been described as dark, stunning, sleek, and powerful.

Her short story collection, A Thousand Years of Good Prayers, won the 2005 Frank O’Connor International Short Story Award and all her books have received numerous other awards. She has been compared with Chekhov, Faulkner, and Alice Munro. The New Yorker named her one of the top 20 writers under 40. When I talked briefly with her at the conference this last weekend, I thought she was under twenty-five based on her youthful voice and physical appearance.

Yiyun Li grew up in Beijing, came to the United States in 1996, and now lives in Oakland, California. She teaches at the University of California, Davis.

“To write is to eavesdrop on people’s hearts.” Yiyun Li