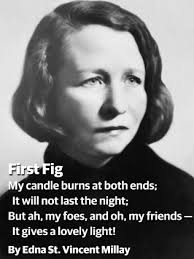 Her middle name, St. Vincent, came from St. Vincent’s Hospital in New York, where her uncle’s life had been saved just before her birth. Edna called herself Vincent in her younger years. She graduated from Vassar in 1917 and moved to New York City where she lived a hectic, glamorous life as a writer and actress in Greenwich Village.

She was the third woman to win the Pulitzer Prize for Poetry in 1923. She was known for feminist activism and  her many love affairs. She used the pseudonym, Nancy Boyd, for her prose work.

Millay was a successful poet for more than a decade when her work in progress, Conversations at Midnight, was burned in a hotel fire in Florida today, May 2, in 1936. She recreated the work, which was published in 1937.

She had a nervous breakdown in 1944 that led to two years of writer’s block.

Millay had another breakdown after her husband’s death in 1949, and she died of a heart attack a year later.