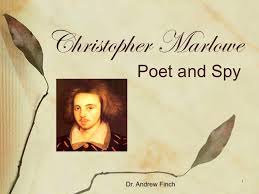 Christopher Marlowe, besides being a poet and spy, was considered the foremost Elizabethan tragedian of his day (baptized in February 1564). “He influenced William Shakespeare, who was born in the same year as Marlowe…”

When Marlowe was at Cambridge college, he was a spy for Queen Elizabeth.

“Marlowe’s plays are known for the use of blank verse and their overreaching protagonists.”

On May 30, 1593, Marlowe, with Ingram Frizer, Nicolas Skeres, and Robert Poley , went to a bar. Marlowe and Frizer argued over payment of the bill. “Marlow snatched Frizer’s dagger and wounded him on the head. They struggled and Marlowe was stabbed above the right eye, killing him instantly.” He was only 29 years old.