A Motif in Norman in the Painting 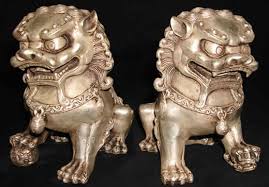 Foo dogs are a motif in my novel Norman in the Painting. Here is an excerpt from Chapter One. Jill meets Norman for the first time when he appears in the antique shop and asks Jill what she is holding. She answers foo dogs and he wants to more about them:

“They are believed to provide protection for you and your home, especially if you place one on each side of your doors.” She couldn’t shake the dizziness she felt since he spoke to her, but she visualized roots from her feet connecting with the center of the earth, which was her way of grounding.
“Those don’t look like dogs. Look more like lions.” The man leaned forward in his chair and then stood as if to see better.
Jill regained her equilibrium enough to move around Evelyn’s open-shelf divider. She stopped at the end of the desk and handed him one.
He turned the statue around in his hands. “Still looks like a lion to me.”
“Another name for them in Chinese is shi. It means lion, but here in the US they’re called foo dogs and have many different styles. Some look like dragons. Some are dog-like. Some even look like large cats with fluffy tails. These do look like lions.” Caution sent a fleeting thought not to be too comfortable talking to this man.
He handed the statue back to Jill and grinned. “Nice to learn something for a change. Are you a teacher?”
His grin sent a flip-flop flutter to her stomach, that same flutter she felt with Reggie when they were dating. What was wrong with her? She didn’t know this guy. “Not a teacher, I’m a CPA.” Jill took a step backwards and clasped the foo dog tighter. “Usually, there’s an older man sitting there. Are you related to him?”

Motifs are repeated through the novel. I like the power of three. The second time I refer to foo dogs is when Jill has a dream about them. She senses the dream predicts future danger. The third time, Jill takes a pair of foo dogs to her sister’s house to protect Vivian.

How do you use motif in your writing?

Filed under Norman in the Painting

One response to “A Motif in Norman in the Painting”