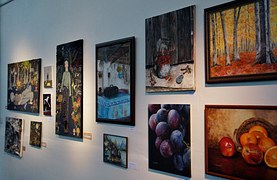 Norman in the Painting Chapter Four: Jill visits Maggie, her best friend who is confined to a wheelchair and owns the only art gallery in town.

The next morning, Jill ran to the Apollo Gallery planning to arrive by 8:00 a.m. Maggie usually opened early, before Evelyn did. Several clients’ monthly bookkeeping had to be completed, but she wanted to talk with Maggie before customers came into the gallery. If anyone would believe Jill about the man in the painting, Maggie would.
Jill pulled on the door, but it was locked. Five minutes to eight. She’d wait. The morning air mixed with fog cooled her down to a shiver. Viv was right; the pink running jacket wasn’t warm enough when she stopped moving. She hopped in place, facing the  spot where Maggie had been hit as she crossed the street on her way back to the gallery after a quick lunch at the cafe. The newspaper printed photos and police contact numbers asking for witnesses. Numerous people described the speeding car and the absence of license plates. Artists made renderings of the man in the driver’s seat from what by-standers remembered. People around town speculated if the hit was on purpose. Maggie had no enemies, but she confided in Jill that she believed it was no accident.  Two years later, the case remained unsolved.

Filed under Norman in the Painting