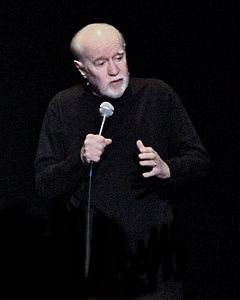 George Denis Patrick Carlin born on May 12, 1937, died from heart failure on this day, June 22, 2008, at seventy-one years old. “He was regarded as one of the most important and influential stand-up comedians.”His final HBO special, It’s Bad for Ya, was filmed less than four months before his death. In 2008, he was posthumously awarded the Mark Twain Prize for American Humor. (information and photo from https://en.wikipedia.org/wiki/George_Carlin)

Here are some Carlin quotes:

“That’s why they call it the American Dream, because you have to be asleep to believe it.”

“I went to a bookstore and asked the saleswoman, ‘Where’s the self-help section?’ She said if she told me, it would defeat the purpose.”

“Isn’t it unnerving that doctors call what they do ‘practice’?”

“And then there are the times when the wolves are silent and the moon is howling.”

Thanks for the laughs, George.