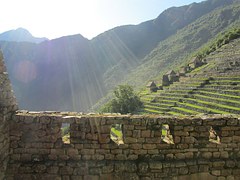 American historian Hiram Bingham discovered Machu Picchu, one of my favorite places on earth, on July 24, 1911. Its location was kept a secret for hundreds of years until Bingham searched for what was considered one of the “lost” cities of the Incas.

https://www.History.com states: “Traveling on foot and by mule, Bingham and his team made their way from Cuzco into the Urubamba Valley, where a local farmer told them of some ruins located at the top of a nearby mountain. The farmer called the mountain Machu Picchu, which meant “Old Peak” in the native Quechua language. The next day–July 24–after a tough climb to the mountain’s ridge in cold and drizzly weather, Bingham met a small group of peasants who showed him the rest of the way. Led by an 11-year-old boy, Bingham got his first glimpse of the intricate network of stone terraces marking the entrance to Machu Picchu.”

In 2000, I went to Machu Picchu with eight friends and I led a group of 12 in 2002 with the help of Ubaldo who had been the gatekeeper of Machu Picchu for over twenty years. He lived on the site for many of those years. Now he leads tours of the ruins, the Sacred Valley, the Urubamba Valley, and other historically significant places. On both trips, we climbed Huayna Picchu, which is the mountain above the ruins of Machu Picchu as seen in most pictures.
I’ve been interested in Machu Picchu since my high school days. Have any of you been there?

2 responses to “Machu Picchu Peru Discovered this Day in 1911”