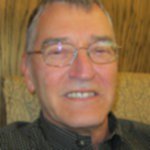 W. Blake Heitzman is a prolific science fiction writer who includes “a dash of science and technology, along with a smattering of history and paranormal topics in his writing.” He is currently working on The Shaman Gene series, the story of Earth’s rise to join galactic society. A Far Traveler, is the first in the series. Two more novels: Panther Watches and Seekers of the Scroll are in draft.  “His love and respect for the desert weaves through his stories. An avid reader, Heitzman is influenced by his favorite writers: Stephen King, H.G. Wells, Bradbury, Vonnegut, Michael Crichton and Tony Hillerman.”  Check his website for more novels available as eBooks from Amazon and Smashwords.

Here is his description about the fascinating story, “Tales of Weissenbach Bridge”  “There has always been a bridge near Weissenbach in the Black Forest. At first it was just a fallen log, a convenience for the Bronze Age natives to cross the Murg River. Later, when settlements developed nearby, a wooden structure was built. When the Romans came, they converted it to stone. Now days, it’s paved and cars pass over it, but since the beginning, locals have known not to wander upon it under a new moon. This, the bartender’s tale, is the first of several stories about careless or desperate souls who did.
The Bartender is the first story in a developing collection of fantasy stories about a bridge that sometimes changes the lives of those who venture upon it during a new moon night. Others never know what became of them. However, the diligent may find clues in the archives and folklore of the village.” 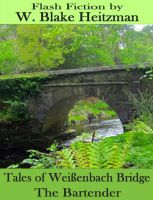 Heitzman’s flash fiction book is free through Smashwords. His short story, “Weissenbach Bridge” is included in my anthology, Written Across the Genres available through Amazon. His “A Far Traveler: The First Alien” is a novel excerpt in the anthology as well.