Snape, A Character To Study 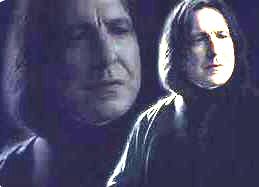 Mother Nature Network on May 7, 2016 has an interesting article titled,

(Quotes are from Laura Moss’s article and photo from Pinterest)

“While the character of Snape is Rowling’s creation, it’s Rickman’s performance that brings him to life and makes Snape one of the most memorable and layered characters in modern literature. Indeed, it was his ability to capture the subtleties and emotional depth of the character that allowed Snape to teach us these important life lessons we’ll remember. Always.”

“Lesson 1. There’s more to people than they show you.”

Moss says Snape is often unfair and cruel to Harry and his friends. In Dumbledore’s office, when Harry sees Snape’s painful memories in the Pensieve, we sympathize with Snape’s complicated character.  Snape hides his courage, sacrifice and ability to love deeply. Only  Dumbledore knows that side of Snape and promises, “My word, Severus, that I shall never reveal the best of you.”

“Lesson 2. Love is worth fighting for.”

Snape’s love for Harry’s late mother, Lily, is strong enough for him to risk everything to protect Harry at the end.  “Rickman’s portrayal of the character hints at the tortured man he truly is, endearing us to Snape despite his many faults.”

Remember how many  months we wondered if Snape was as ruthless as he seemed or if he would end up being a hero?

“Lesson 3. People can change.” Read Laura Moss’s article to find out how she explains that lesson.

I believe people can change and I’m joyous when they change to better themselves and the world.

I want to write an in-depth character like the example Moss gave us, don’t you?

The only character I have written that could change enough at the end of my books would be Samuel, my antagonist in Hada’s Fog. I could write the change in the follow-up YA novel that has the same characters as Hada’s Fog but from Lily’s point of view. I’ll keep Moss’s article in mind and see if I can pull it off with Samuel’s character.

One response to “Snape, A Character To Study”