“On August 14th, with 500 meters left in the race, Elle and her teammates surged past the other boats to clinch their 3rd straight Olympic gold. With a lot of reasons to celebrate and focus on her team’s outstanding success, Elle still took the time that very day to tell SPCA International that she was now ready to help the animals of Rio who were displaced by the construction of the Olympic sites.” 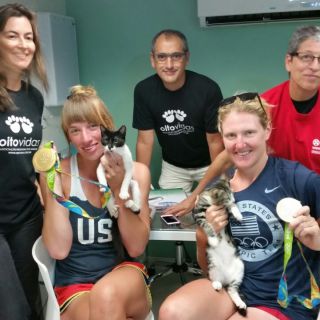 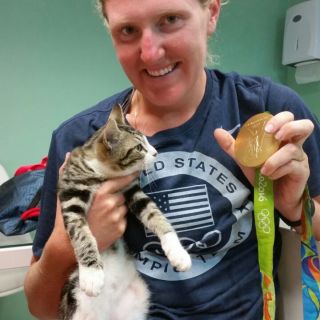 The Oldest Albatross Lays an Egg 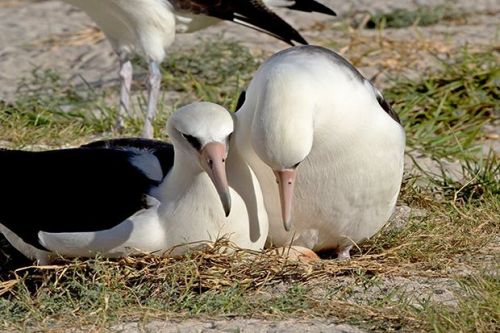 This Laysan albatross, named Wisdom, is 64 years old and it is estimated she has raised as many as 36 chicks in her lifetime. The breeding male and female of this species produce one egg  a year and rear the chick for six months.  The rest of the time they fly and scan  for food. The estimate for Wisdom’s flights total more than 6 million miles.

Information about these albatrosses came from the link above. Takepart.com offers many topics besides unusual animals and birds.

Wikipedia quoted the United States Fish and Wildlife Services, “Wisdom’s continued contribution to the fragile albatross population is remarkable and important. Her health and dedication have led to the birth of other healthy offspring which will help recover albatross populations on Laysan and other islands.”[6]

Wisdom is documented to be the oldest wild bird  in the 90- year history  of the North American Bird Banding Program.

What would you name Wisdom’s newest chick?

If the chick could talk, what would be his/her first sentence?

Would You Like to Know About the Volcano Rabbit? 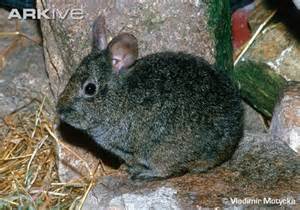 The volcano rabbit is an endangered species. It is one of the smallest and oldest of the rabbit species, measuring about twelve inches long and weighs about one pound. They have “short brown to black fur, short legs and rounded ears. This species of rabbit does not have any visible tail.”

Their habitat is “on the slopes of four volcanoes in central Mexico, south of Mexico City.” Populations are dwindling because of “habitat destruction, climate change, and hunting.” Mexican law made hunting the Volcano Rabbit illegal.

The above information is from http://www.warriorechidna.blogspot.com/

“”To learn more about the Volcano Rabbit, visit the following sites: 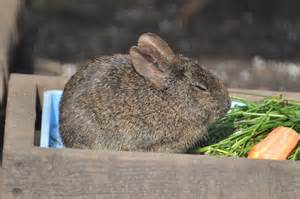 I think these rabbits living on the slopes of volcanoes would make excellent characters for children’s stories.

Lions Give Hugs too

Here is another scene where a lion remembers his owners who rescued him and played with him when he was a cub.

If this link doesn’t open here, it’s worth clicking and going to YouTube to see Christian the Lion’s full story and the two men who rescued him from a cage in a London store.  (Hover over the link and press control to go to YouTube.

Tagged as Animals remember people who loved them, Christian the Lion, Julaina Kleist-Corwin, Lions give hugs