Tag Archives: Recipes and Recollections of my Greek-American Family 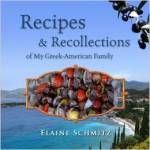 In Recipes and Recollections of My Greek-American Family, Elaine Manolakas Schmitz shares her family’s traditional recipes and tales. It’s a beautiful book with color photos and high quality paper. She tells about two families who migrated from villages in Greece to Greektown Detroit, Michigan. “As they settled, mingled, and grew, they maintained their culture, customs, and cooking.”

I admire good cooks, cookbooks, and cooking shows, but I try very few  new recipes. I used to be a fair cook but since I’ve become a writer, my culinary skills have diminished. The last two Christmas dinners, I made what should have been a simple dinner of beef roast and vegetables in a crock pot. Last year, I added too much water and it became a boiled roast that took hours longer than the butcher told me it would. This year, I bought the roast from a ranch that prides itself with range free cattle, grass-fed, no hormones or other additives. We buy hamburger from them often and have never been disappointed. The owner gave me directions on how to cook the roast in my crock pot since I told her about my previous attempt.

After three hours, I checked the roast and gasped. The roast had curls. You know those looped scarves that are popular? My roast was a gray, very wet version, sections so curled, I could not loosen them. And water…it was at the top of the pot again, ready to spill through the lid. I quickly scooped out five cups. Where did all that liquid come from?  I struggled to cut a small clinched piece to taste. I chewed and chewed and chewed, tougher than beef jerky.  The flavor of spices was good but no one could eat it. There wasn’t enough meat between all the gristle. The garbage can had a feast.

I thought I could ask Elaine Schmitz for advice since I see her almost every Monday in writing class, but I’ve sworn off of cooking roasts in a crock pot…actually I’ll never buy a roast again. Our family agreed to eat out next Christmas Day. 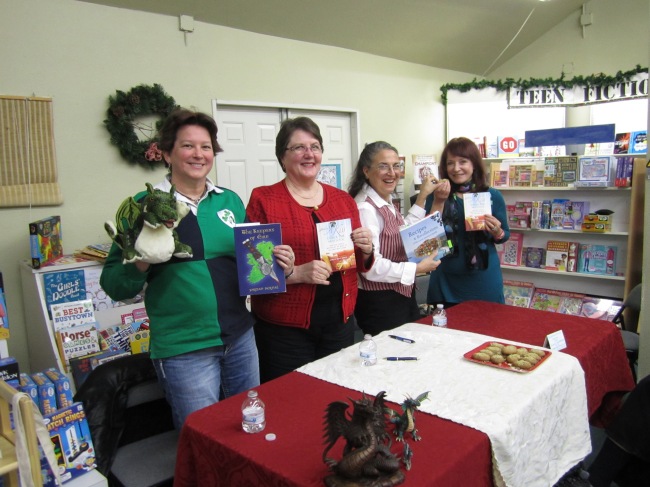 Tagged as A Kiss Under the Mistletoe, book reading, Elaine Schmitz, Harlequin Christmas Anthology, Jordan Bernal, Neva Hodges, Recipes and Recollections of my Greek-American Family, The Keepers of Eire

Harlequin’s 2014 Christmas Anthology, A Kiss Under the Mistletoe

My story, “The Crumpled Card” has been published in Harlequin’s 2014 Christmas Anthology called, A Kiss Under the Mistletoe.  I will have a book reading in Pleasanton Tuesday night. Neva Hodges also will be there to read her story, “The Christmas Tree”. Jordan Bernal will read from her newly published fantasy novel, The Keepers of Eire and Elaine Schmitz will read from her Recipes and Recollections of My Greek-American Family. Refreshments include cookies made from a recipe in Elaine’s book.