William Faulkner’s As I Lay Dying 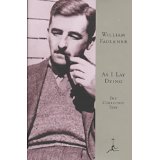 As I Lay Dying is Faulkner’s fifth novel published in 1930. Most of the 59 chapters are short and are narrated by 15 different characters in a stream of consciousness writing technique. He wrote it in six weeks and didn’t change a word of it. It’s considered one of the best novels of 20th-century literature.

Addie, the mother in a poor family, requested that when she dies, she wants to be buried in her hometown of Jefferson, Mississippi, a trek in a wagon pulled by mules. Her husband and five adult children try to honor her wishes but run into several difficulties. Previously I was not a fan of Faulkner’s style, but after reading Intruder in the Dust, I was hooked. I couldn’t stop reading As I Lay Dying although I had many projects to do, I had to find out what would happen next.

In the chapter from Addie’s point of view in a flashback, she says her father used to say that “the reason for living was to get ready to stay dead a long time.” Readers learn about her unhappiness with her life. She’s tired of taking care of the family. She regrets choosing Anse for her husband.

Faulkner created a memorable family. I recommend taking time to meet them.

Tagged as As I Lay Dying, book recommendation, Intruder in the Dust, Julaina Kleist-Corwin, William Faulkner

Are You a William Faulkner Fan?

William Faulkner’s Intruder in the Dust was the book chosen for our reading group’s February novel.  We all agreed it was a difficult style to read. He used little punctuation. The pronoun ‘he’ in his long sentences could mean Chick or Lucas or his uncle or any male in the scene. Within the long, long paragraphs, we often couldn’t figure out which ‘he’ talked or took action.

However, we all liked the richness of the setting, and three out of five us appreciated the novel inspite of the writing style.

What Faulkner novels have you read?  What do you think of his writing?